Mike, Nick, and Kara are joined by friend of the show, Scott McGovern – a font of knowledge regarding the comics industry. 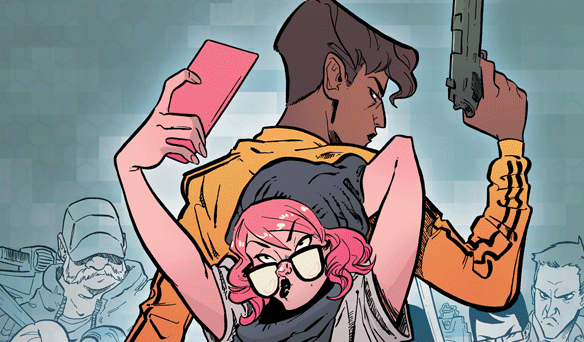 This episode was recorded on August 12th, 2018! This week, Mike, Brian and Nick get into some of the fantastic questions asked by the fans of IRCB.  PLUS: Zine #2 is released today! Make sure you check this one out for an interview with Vita Ayala (The Wilds, Submerged, Supergirl)! Timestamps 00:00:00 – Start/Last Week in Comics 00:31:16 – Comic Picks 00:31:16 – Q&A with Mike, Nick, and Brian 01:05:01 – Wrap/Credits Comic Reads/Picks for this week The Wild Storm: Michael Cray #10 Transformers: Dark Cybertron Volume 2 Infinity Wars #1 James Bond: Black Box #1-6 Aliens: Dust to Dust #2 The Weatherman #3 Crowded #1 Gideon Falls #6 Relevant Links/Information Mike – @mikerapin Brian – @Brianhead Nick – @dethstarplnz

Episode 71 | I’m not an expert in stickers

This week’s episode was recorded on May 15th, 2016. Our show this week features guests Paul and Nick with our host Mike Rapin. Starting off with a discussion about the death of Darwyn Cooke, the discussion turns to All Ages comics and what makes a comic “All Ages” vs. being “Just for Kids.” Comic Reads/Picks for this week American Alien #7 Dept. H #2 Future Quest #1 X-Men: Age of Apocalypse Prelude Killbox #1 Hinterkind Volume 1 Flash Gordon #2-3 Hellboy and the B.P.R.D. 1953 #3 The Paybacks, Vol 1 Starve Vol 1 Civil War (2006) Two Brothers An Age of License Relevant Links Mike – @mikerapin Nick – @dethstarplnz Paul – @OhHiPaulie Timecodes Start/Darwyn Cooke – 00:00:00 Last Week in Comics – 00:10:01 Comic Picks – 00:31:54 All-Ages Comics – 00:40:03 Credits – 01:05:52 This week’s music was by Atmosphere and Infinity Shred. This week’s episode was produced by Mike Rapin and edited by Zander Riggs (who is quite possibly an egg?). Have a question? Want us to talk about a topic? Submit discussion topics to our subreddit /r/IReadComicBooks and get a hold of us here: ircb@destroythecyb.org – @ircbpodcast & #IReadComicBooks. And we want to give a warm shout out to #PodernFamily listeners! Hello! Stitcher | TuneIn | Overcast | Google Play

This week’s episode was recorded on August 23rd, 2015, and July 7th, 2015. At one point, Nick, Paul, and Mike decided to talk about Transformers vs. GI Joe at length and store it away. It was this week that, despite having comic picks (Dead Drop #4, Superman #43, and Fall of Ninjak), they had nothing to talk about (except some lingering thoughts from last week). So, as a fix for this situation, they have pulled from the “vault” their talk on Transformers vs. GI Joe–if you’re not sick of them talking about it yet, you will be after this week. This week’s music was by The New Law and Infinity Shred. This week’s episode was edited and produced by Mike Rapin. Have a question? Want us to talk about a topic? Submit discussion topics to our subreddit /r/IReadComicBooks and get a hold of us here: cyborg@destroythecyb.org – @destroythecyb – destroythecyborg.tumblr.com Listen on Stitcher